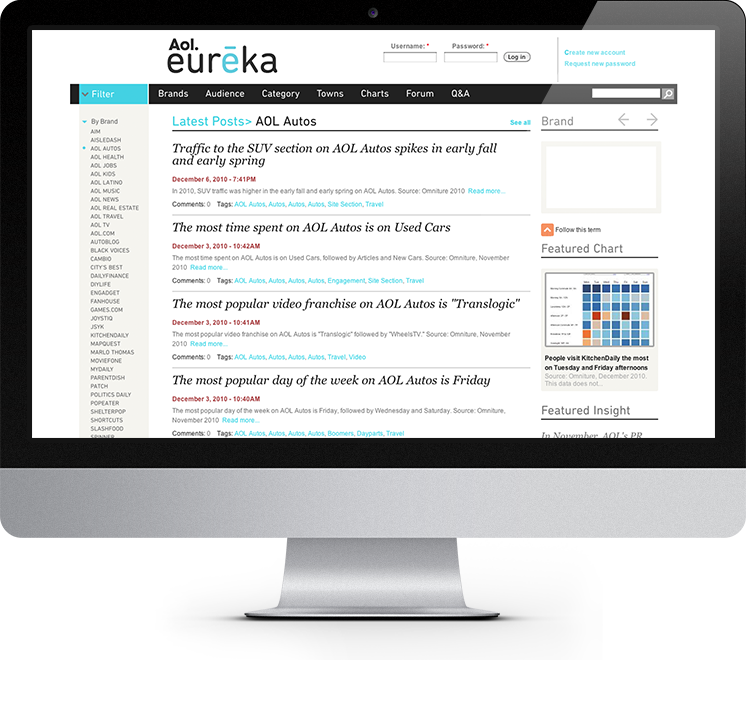 AOL contacted Drupal Connect in Nov 2010 with an internal Drupal project they wanted realized as soon as possible. The project was to act as a hub of information between the online brand managers and sales team to share information on trends in web traffic and advertising. The planning and creative work had already been completed, and they were looking for a company that specialized in the execution of custom Drupal projects. Drupal Connect was chosen as the team for the job on Nov 4th and work began on Nov 8th. The project was executed by two members of the Drupal Connect development team with combined Drupal experience of over 9 years. Two additional resources were assigned, one specifically for CSS styling, the other to complete one specific functional requirement of the project. The ad-hoc nature of the in-house and extended team meant the project could progress quickly and within the time and cost budgeted. The project was delivered on Dec 10.

The custom design was created in-house at AOL, and was provided to the Drupal Connect team at the beginning of the project. This meant there were no delays or uncertainties for the development team, and no duplicate effort wasted due to design or strategy revisions as designs were realized and matured. The great work done by AOL meant that the project could move ahead as quickly as possible. The custom theme was developed in-house using a "build, then style" approach which takes greater developer-styler coordination, but produces far cleaner PHP code than using pre-integrated HTML & CSS. Drupal Connect considers this the "Drupal Way" and does not try to cut corners by using offshore PSD-to-theme services for this reason.

The site was built to AOL's specification using standard off-the-shelf Drupal components where practical. Five custom modules were developed to round out functionality provided by core and contributed modules chosen, which is typical for a project of this scope. All custom code was developed to the strictest code standards and good practices commonly adopted by the Drupal community for security, performance, and maintainability. To help navigate content across hundreds of categories in 7 vocabularies, the development team built a custom filtering interface for site content. This system leveraged Views and Panels, but also the built-in Taxonomy browsing path interface. Custom content export functionality was built so that the AOL sales team could easily select certain content they wished to export. This content was then easily exported as pre-built Powerpoint presentations or PDF files, complete with AOL corporate branding, ready for consumption by potential or existing advertising clients.